DULUTH, Minn. — As the West burns, the South swelters and the East floods, some Americans are starting to reconsider where they choose to live.

For advice, a few of them are turning to Jesse Keenan, a lecturer at the Harvard University Graduate School of Design. At least once a day, Dr. Keenan, who studies urban development and climate adaptation, gets an email from someone asking where to move to be safe from climate change. The messages come from people who are thinking about moving not because they have already been hit by catastrophe, but because they see the writing on the wall.

So, what does Dr. Keenan suggest to these advance planners? Maybe climate-proof Duluth.

That’s a slogan that he created as part of an economic development and marketing package commissioned by the University of Minnesota Duluth. Some community leaders think they can spur growth by bringing in more people, and they sense an opportunity in climate change. And Duluth isn’t the only urban area that has climate migration on their radar. In a February speech, the mayor of Buffalo, Byron W. Brown, declared his city a “climate refuge.” 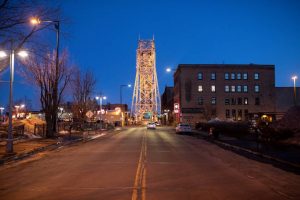 Duluth’s infrastructure can accommodate 150,000 more people, but the current population is just 86,000. The city only added 56 people from 2010 to 2016.CreditTim Gruber for The New York Times

Dr. Keenan emphasized one day in mid-March as we stood on the ice of Lake Superior that the Duluth slogan was meant to be tongue-in-cheek. The science behind it, though, is no joke.

Nowhere in the world is immune from climate change, including Duluth. “We’re getting more precipitation in bigger amounts than we ever really observed,” said Kenneth Blumenfeld, a senior climatologist at the Minnesota Department of Natural Resources.
“But when you stand back and look around, it’s almost like, ‘But we’ve got it good.’”

Climate projections suggest that, because of geographic factors, the region around Duluth, the Great Lakes area, will be one of the few places in America where the effects of climate change may be more easily managed.

First, it’s cool to begin with. That means, as temperatures increase, it will remain mild in relative terms. By 2080, even under relatively high concentrations of carbon dioxide emissions, Duluth’s climate is expected to shift to something like that of Toledo, Ohio, with summer highs maxing out in the mid-80s Fahrenheit.

“We’re not seeing worse heat waves or longer heat waves or more of those long nights that don’t fall below 75 degrees,” Dr. Blumenfeld said. “Instead, what we’re seeing is warmer winters, fewer days during winter where we get to negative 30 Fahrenheit.”

Because the region will remain relatively cool, it will have a lower wildfire risk than the West or the Southeast. Wildfires thrive in hotter temperatures, which dry out plants and make them easier to ignite.

And, because Duluth is inland, it’s mostly protected from the effects of sea level rise.

Duluth, which sits at the western end of Lake Superior, the greatest of the Great Lakes by volume, also has fresh water. A lot of it. Superior is so voluminous that, if poured out, it would submerge North and South America under a foot of water.

“At the end of the day, it’s really about fresh water,” Dr. Keenan said. “It’s that simple. You’ve got to have fresh water.” 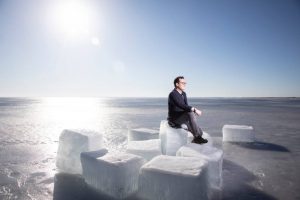 Jesse Keenan on Lake Superior. “At the end of the day, it’s really about fresh water,” he said.CreditTim Gruber for The New York Times

You’ve got to have quite a bit, in fact. To meet our minimum needs, from drinking to cooking and cleaning, the World Health Organization says we need 13 to 26 gallons of water a day, or about 50 to 100 liters. The average American uses 80 to 100 gallons.

The city hasn’t formally adopted Dr. Keenan’s climate refuge plan so far, but it has the attention of the mayor, Emily Larson. “This idea that we have this national researcher who has identified Duluth as a place that has kind of a secret sauce when it comes to being a place for refuge and sustainability and resiliency, that is something you want to be a part of,” she said.

Presented to the public at the end of a two-day conference focused on understanding Duluth’s future in a warming world, Dr. Keenan’s research, which partly aims to predict which states are likely to see more people leaving because of climate change, suggested that present-day Texans and Floridians might make excellent future Duluthians. 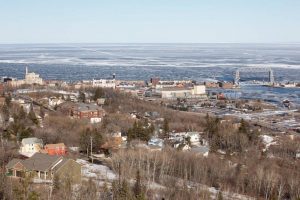 The Lake Superior shoreline in Duluth. “What do people from Florida really want?” said Dr. Keenan. “They want the infinite horizon of the ocean.”CreditTim Gruber for The New York Times

“What do people from Florida really want?” said Dr. Keenan, himself a former Floridian who still keeps a residence in the state. “They want the infinite horizon of the ocean.”

Jesse Keenan on Lake Superior. “At the end of the day, it’s really about fresh water,” he said.This may be why one of Dr. Keenan’s sample advertisements, “Duluth,it’s not as cold as you think,” featured an image of a surfer in a wet suit.

That appeared to be tongue-in-cheek, too. When he showed the photo during his presentation, the audience laughed. Duluth does have a surf season. But the proposed ad glides past the fact that it’s in winter. Surfers head out into the lake in temperatures as low as minus 15 Fahrenheit, or minus 26 Celsius.

“We had one week in particular that it was negative 60 almost every day with wind chill,” said Kyle Skarp, an electrician, as he watched friends play board games in the back room of Blacklist Artisan Ales, a brew pub in Duluth. “You didn’t want to go outside. And not because it was uncomfortable, but because it’s unsafe.”

Mr. Skarp said he liked the idea of more people coming to Duluth. He said it would mean more jobs.

But not everyone agrees with Dr. Keenan’s plan. Because it favors those who are financially able to move, it selects for the affluent and, he acknowledged, raises questions of gentrification.

After the presentation, Karen Diver, a faculty fellow at the College of Saint Scholastica who served as special assistant to the president for Native American affairs during the Obama administration, cautioned that the city had an uneven track record when it comes to embracing diversity.

A walk on Lake Superior in March. CreditTim Gruber for The New York Times

“From my perspective we haven’t even figured out how to interact in a positive way with our indigenous people,” said Ms. Diver, a member of the Fond du Lac Band of Lake Superior Chippewa who lives near Duluth on her tribe’s reservation.

Mayor Larson seemed to acknowledge that. “I think we have a tremendous amount of work to do as a community to truly be a place where migration and immigration are seen as being strength and vitality and growth,” she said.

Ultimately, if Duluth decides to invest in attracting climate migrants, whether voluntary or displaced, the city may face competition.
At least one other Great Lakes city, Buffalo, 700 miles away on the eastern tip of Lake Erie, also has winter cold, and the same geographic blessings as Duluth. Buffalo is predicted to have fresh water even as the climate warms, and its summers will remain relatively cool.

But Buffalo has already received what could be described as a wave of climate migrants, after Hurricane Maria devastated Puerto Rico in the autumn of 2017.

They came partly because Buffalo has an established Puerto Rican population, which meant that many prospective migrants had friends and relatives in the city.

At the same time, Buffalo had advertised itself on Puerto Rican television in search of Spanish language teachers. They came because they had connections and knew that there was a chance they could make a life there.

“About 10,000 people came here after the hurricane in Puerto Rico,” said George Besch, chairman of the board of directors at Designing to Live Sustainably, a nonprofit group working to help the Buffalo-Niagara region adapt to climate change.

According to Matthew Hauer, an assistant professor of sociology at Florida State University, people who migrate, whether by choice or not, still like to stick close to home, moving just far enough to get out of harm’s way but often remaining within the same state or region.

When people do go far away, he said, they either move for higher paying jobs, or they “tend to follow kin networks and friend networks.”